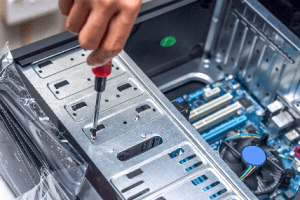 There are three important questions that you should ask yourself before starting:

Your intention – how will you use your PC? What programs do you need? What games do you want to play?
The Future – in the future will you want a better graphic? More RAM? How long do I want this configuration to last?
The Budget – the great guillotine of plans.

The more important parts of a computer

Let’s now take a quick look at some of the major components of a PC tower.

This is also referred to as the ‘brain’ of the computer. It is a microprocessor chip that essentially manages the entire functioning of the computer system.

This is a kind of storage device that holds data required for processing. It needs to be very fast and is connected directly to the CPU. Of course, depending on the kind of function they perform, one can find different kinds of memory. The Random-access memory (RAM) is used to store the temporary data that the computer is currently working with. The more the RAM, the more data the CPU can access – obviously, this means the system works faster. On the other hand, the Read-only memory (ROM) is a type of permanent storage used by the computer to store important data that never changes. You can also find the Basic Input-Output System (BIOS), which is a kind of ROM but used exclusively by the computer to establish communication when the computer gets powered on for the first time.

You may also hear terms like virtual memory or cache memory. Cache memory is an extremely fast kind of RAM that also connects directly to the CPU and is used to store data that is frequently used. Virtual memory, on the other hand, is just a temporary storage area created on the hard disk to swap data in and out of the RAM to facilitate the working of the system.

This is the main permanent storage in the computer system.HDDs are cheaper and typical of fairly large storage capacity; SSDs are smaller, more expensive, but way faster. You can read more here.

The graphics card helps the computer convert image data into a format that can be displayed on the monitor.

The sound card is what helps the computer to play or record audio files.  It converts analog signals into digital data and back.

This is an electrical transformer used to regulate the supply of electricity to the system.

When a computer system is working, various components have a role to perform and they could generate heat during their functioning. Fans and cooling systems make sure that the computer does not get overheated.

Removable storage devices allow you to easily transfer data from the computer to the device and vice versa. Earlier CD-ROMs and DVD-ROMS would be used for this purpose–even now most computers come equipped with CD-ROM or DVD-ROM drives. However, in recent times, USB drives that can be plugged into one of the USB ports have become very popular. Even the smallest of such devices can offer nearly the same storage capacity as DVD-ROMs.

Instructions on how to build a computer

The first thing we do is place the PSU in its slot, and screw it in. 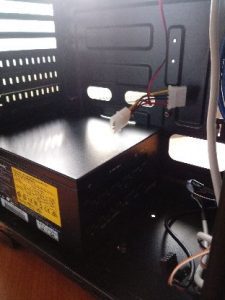 Then, we mount all the drives ( SSD, HDD, and DVD-RW ) in their bays. We start with the SSD. 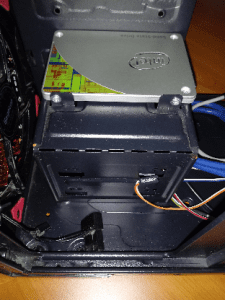 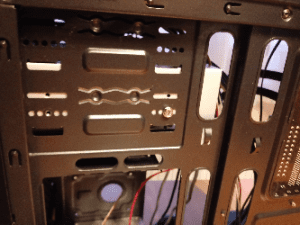 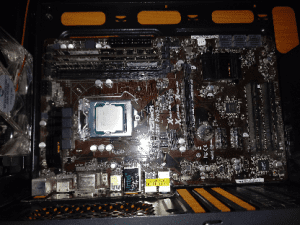 We place the motherboard’s IO shield in the case. 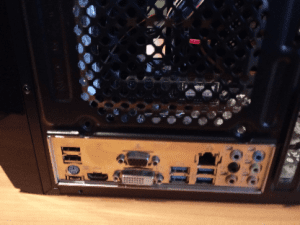 We then put the motherboard itself in the case, and we fix it with screws.

Cases come with power and reset switches, power, and hard drive LEDs, and various
other external connectors, like USB or headphone jacks. These must be connected to the motherboard, inside the case.

Next, we apply thermal paste to the CPU.

We press the shiny side of the heat spreader on the CPU, and we fix it in place using screws.

Then, we connect the water pump and the fan to the motherboard, for power.

Finally, we place the fan and the radiator on the side of the case, using screws.

After the cooler is mounted, we use SATA cables to connect the various drives to the motherboard.

Next, we mount the graphics card in the PCIe slot.

The only thing left to do is close up the case and test the PC.