The best feature of Samsung 860 EVO

In my opinion, endurance is the best feature. Endurance can be measured through a unit known as Total Bytes Written, which is meant to help users understand how long their drive should last.
For the 860 Evo, TBW=1200TB compared to 300TB for the last generation, 850 Evo.
That’s four times better. 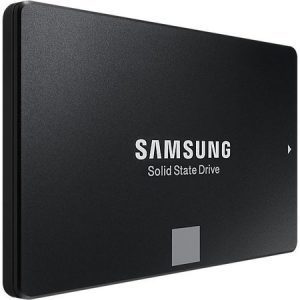 This SSD has an affordable price for a huge amount of solid state storage.

Why use an SSD over an HDD

Speed is the main advantage of an SSD over an HDD. To understand why you need to
understand how data is written to SSDs. With a hard drive, data is basically written serially, down a single channel. Inside an SSD, data is written in a parallel mode, down multiple channels to the multiple NAND chips at once. The more NAND chips an SSD has, the more channels it has to write/read across, and the faster the drive will be. So, for an SSD, a higher capacity means better performance.
You can read more about choosing between  HDDs and SSDs in this post.

Other things to consider before buying

Before buying, you should ensure the compatibility of your motherboard with the SATA III feature of this SSD. The difference between SATA II and SATA III is the data transfer speed (SATA II – 300 Mbps – SATA III – 6Gbps). If you are not sure if you have SATA III, you can use this free program: HWiNFO.
With cloud storage getting cheaper, you can keep more data in the cloud and less on your computer so you may not need as much storage space as you did a few years ago. In order to install it in your PC, you need to buy a SATA III 6 Gbps cable and a mounting bracket. It’s cheaper if you buy the bundle, not separately.

If you need to buy a SATA SSD right now, Samsung 860 EVO is the best option.
An SSD is one of the best, if not the best way to upgrade any old computer that has a traditional hard drive. Even if your computer already has an SSD you can buy a bigger one if you ran out of space.

Nowadays, the built-in sound found on modern motherboards is usually really good. The problem though is that motherboards have limited space for the sound card. As a result, onboard audio is unable to produce the same quality of audio as a dedicated sound card, because many of the features needed to produce clear and crisp sound are not implemented.

If you use your PC for music production, you need high sound quality. So you should be interested in features like signal-to-noise ratios, harmonic distortion, and audio fidelity. Don’t forget, that you’ll need a good set of speakers or a quality headset to truly hear the difference.

Creative Sound Blaster Audigy PCIe RX 7.1 is a mid-priced sound card that’s ideal for all your music,  gaming or movies needs. Some of the most notable features of this dedicated sound card:

Other great features of this soundcard:

The Sound Blaster Audigy Rx sound card has an advanced chipset, the Creative E-MU, that maintains the reverb engine EAX (Environmental Audio eXtensions) hardware sound acceleration. You can fine-tune your EAX settings using the powerful EAX Studio software, that lets you control and perform detailed adjustments to all of the EAX Advanced HD settings. You can add environmental effects to your music, movies, and games.

If you consider buying it for your gaming experience, because the programming of last generation games has been using the CPU for the sound effects for some time, the Creative Sound Blaster Audigy PCIe RX 7.1 is for those nostalgic players, who enjoy the list of games that used hardware EAX effects that this card still supports. This ensures you get great quality effects and audio, without affecting your computer’s processing power.
As for your movie experience, supporting up to 7.1 multi-channel speaker output gives you an immersive, cinematic audio experience.